Chris Neil was born on June 18th, 1979 in Markdale, Ontario. He started out playing minor hockey in the town of Flesherton, Ontario. He got his junior hockey start with the Junior "B" Orangeville Crushers. He went on to play three successful junior seasons with the OHL's North Bay Centennials and in his final season, Neil gave an indication that he could be more than merely a physical presence, scoring 72 points in 66 games. He was drafted in the NHL by the Ottawa Senators in 1998 and has been shedding blood, sweat and tears with them ever since. Chris Neil is the player opposing fans say they hate but wish they had on their team. He is known to hit everything that moves, and likes to antagonize opponents. Neil never backs down from a challenge and always gives maximum effort on the ice.  The only thing bigger than his punch is his heart. Chris Neil is a solid and loyal team player and is considered to be a key member of the team's veteran core. 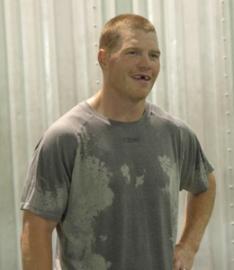