Wyatt Trumbley is a Métis defenseman from Campbell River, British Columbia.  He was born on September 24th, 1994. He is a solid 180 pounds and stands 6 feet 2 inches tall. In 2012 he played Junior B for the Campbell River Storm. Trumbley is an unyielding stay-at-home defense player that knows how to effectively pinch in when needed.  His skills on the ice can only be matched by the role he plays in the locker room. Trumbley is a natural leader who has almost always been Captain or Assistant Captain of his team. 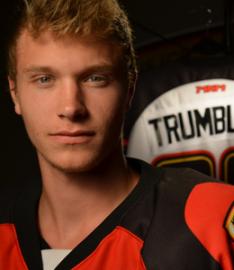