Alex Killorn played college hockey with the Harvard Crimson in the NCAA Men's Division I ECAC Hockey conference. In his senior year, Killorn's outstanding play was recognized when he was selected by the ECAC Hockey First Team.  His stellar performacne was noticed by the Tampa Bay Lightning, and on May 19, 2012, he signed a two-year entry-level contract with that team. On February 10, 2013, Killorn got his first NHL assist on a goal scored by Vincent Lecavalier against the New York Rangers. Later in the year, Killorn scored his first goal against the Florida Panthers.  In his three years in the NHL with the Tampa Bay Lightning, he has totaled 98 points in 191 games played (39 goals , 59 assists ). He had a great playoff run during the 2014-2015 playoff season, with 18 points in 26 games played (9 goals, 9 assists ), thereby helping his team reach the Stanley Cup Finals. 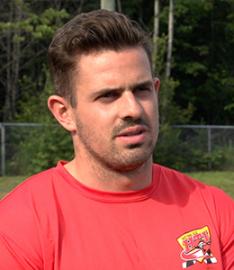