Big Plume is from TsuuTi’na First Nations, in Alberta and is presently 5 feet 11 inches tall, 185 pounds. Born on April 4th, 1995, he played Midget AA in Calgary’s Southland hockey league where he was know for his gritty physical style of play. Focused, perceptive and intrepid, Big Plume is a power forward who loves to do it all, score, hit and muck it up. 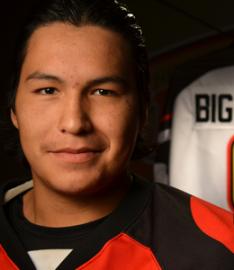