From Saddle Lake First Nation and St-Albert Alberta, Makokis is a returning Hit The Ice Player. After last year’s camp, Silas joined the Saddle Lake Junior B Warriors for his 2012-2013 season where he played both defense and left wing, proving that he is not only a versatile player but possesses great offensive instincts.  Makokis is known to be a great natural skater, a trait that can only be matched by his high competitive nature. 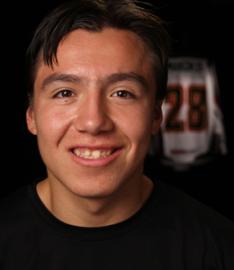