Every year, John endears himself to players and viewers alike with his lively demeanour, his excellent leadership skills and his knack for saying the right word at the right time. A pillar of the series, he has been coaching the Hit The Ice team since Season One.

John’s knack for turning raw talent into genuine gold comes from his extensive experience in the world of ice hockey. As a player, he played more than five hundred games in the NHL, serving with the Montreal Canadiens, the Detroit Red Wings and the Pittsburgh Penguins, and more than three hundred games on various European teams. His coaching experience includes a stint as assistant coach for the New York Islanders and a long shift as head coach in the QMJHL (Acadie-Bathurst Titans and Gatineau Olympiques). A proud member of Kitigan Zibi First Nation in Quebec. 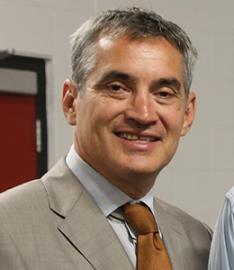