Being an ex Junior A' Hockey player, Neil Frotten has traveled the country playing and training for his sport. This experience alone has led him to believe in the power of feeling strong and functional through physical fitness. He has also competed at the Red Bull Crashed Ice International Quebec City in 2008 and in 2010 taking a break in 2009 only to compete in 2 Fitness Modeling competitions; UFE Mayhem and WBFF. Before becoming a personal trainer, Frotten graduated from University of Ottawa in 2006 with a Degree in General Arts.  He then became a Can-Fit-Pro Personal Trainer Specialist, a Can-Fit-Pro Nutrition and Wellness Specialist and also obtained certifications in Functional Movement Assessment, Functional Training, Performance Coaching and First Aid. Frotten is passionate, intense and a great role model. Working with teams as well as individual athletes, Neil specializes in performance coaching. Co-owner of EPIC Fitness - Ottawa’s go-to functional facility for private personal training - Neil Frotten’s ultimate goal is to work with select professional athletes looking to take their sport to a new level. 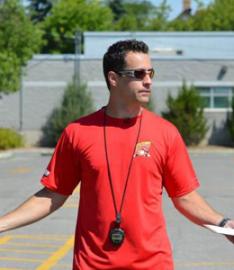