Sudarshan Maharaj, also known as Sudsie, is a professional goaltending instructor who has worked with the New York Rangers, the New York Islanders and the Phoenix Coyotes. He also recently served as lead instructor for the Ontario Hockey League’s Goaltending Development Camp. Sudsie is also responsible for Goaltending Scouting Services, which was an organization that evaluated draft eligible goaltenders for National Hockey League clubs. Originally from Trinidad, Sudsie moved to Canada when he was six years old and quickly fell in love with hockey. Growing up, he minded the net for his house league and did a pretty good job at it. Sudsie played in Europe where he played in the Swedish league for six years.  When he came back to Canada, he pursued a coaching, training and scouting career. Today he is a member of Hockey Canada’s Goaltending Curriculum Writing Team. To all the professional goalies he has coached he is known as one of the best in the game. 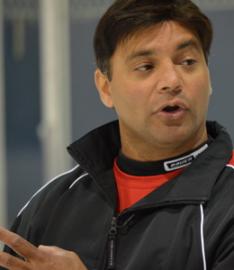