Kane was born in Vancouver, British Columbia, on August 2, 1991. During his major junior career, he won the Memorial Cup with the Giants in 2007, finished as runner-up for the Jim Piggott Memorial Trophy as WHL rookie of the year in 2008 and was named to the WHL West First All-Star Team in 2009. Kane also set the Giants' franchise record for single-season goals in 2008–09. Internationally, Kane has won gold medals with Team Canada at the 2008 Ivan Hlinka Memorial Tournament and 2009 World Junior Championships. In the 2009 NHL Entry Draft, Kane was selected fourth overall by the Atlanta Thrashers. He became the highest drafted player from Vancouver since Paul Kariya. Kane made the Thrashers' lineup out of his first NHL training camp in 2009. Kane finished his NHL rookie year with 14 goals and 26 points in 66 games, giving him the 12th spot among first-year point-scorers.  Today, at the age of 21, he is considered one of NHL’s rising stars. Kane is an impressive skater and gritty competitor. He can rely on goal-scoring instincts and abilities, and he never backs down from physical confrontations. 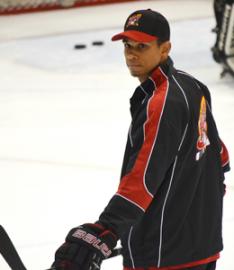