Taryn is a proud Métis from Prince Albert, Saskatchewan. He was born on December 14th, 1995 and he currently stands an inch over 6 feet and weighs in at 200 pounds. Taryn played Midget AAA with the Yorkton Harvest in 2012, where he won the Reg Kachanowski Award for top goaltender.Phaneuf’s mad skills in the net also saw him win the All-Star Goaltender award at the 2012 National Aboriginal Hockey Championships where he also helped his Saskatchewan team win gold. 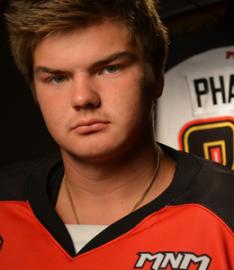