Cardinal measures an impressive 6 feet 4 inches and weighs 180 pounds. He was born on October 6th, 1995 and is from Saddle Lake First Nation, Alberta.  His tall stature and hockey smarts assured him a leading role with the Northeast Panthers Midget AA team – the top team of its division- in 2012.  He can also be a productive forward player, which he proved during the 2012 National Aboriginal Hockey Championships, where his team won silver. 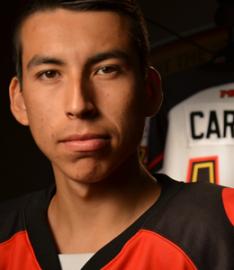