Lapierre-Wanihadie is a member of Horse Lake First Nation from Grande Prairie, Alberta. He stands 6 feet tall and weighs just under 180 pounds.  Lapierre-Wanihadie is a true versatile player with an offensive touch; no matter what position he plays on the ice.  In 2012 playing as a forward he was Grande Prairie’s Midget AA top scorer and as a defenseman, he received two MVP awards as well as scored 2 game-winning goals at the 2012 NAHC. 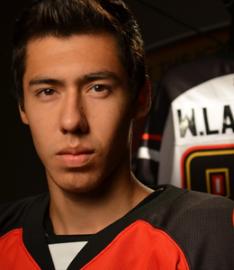