Born on March 18th, 1996, Nolan is the youngest player on the Hit The Ice roster. This 6-feet-1-inch 160-pound (and still growing) defenseman was raised playing hockey in the First Nation community of Garden River, Ontario.  His first year of Midget was played with the AAA Soo Indians under-18 team. Nolan is a well-rounded and skillful defenseman who plays with speed and heart. 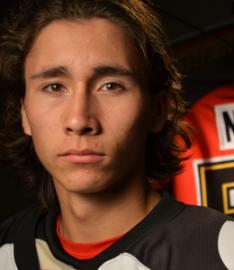