Visitor is from the Cree Nation of Chisasibi in Northen Quebec. He was born on March 3rd, 1994. Known for his imposing stature of 6 feet 2 inches and 255 pounds, Visitor is a steamroll with a deadly shot, and he proved that during his 2011-2012 season with the Junior A Chisasibi Hunters, where he was one of the most productive players on his team. 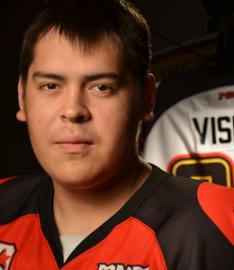