From Saddle Lake First Nation and St-Albert Alberta, Makokis is 5 feet 11 inches tall, 184 pounds and was born on September 5th in 1995. He played Midget AAA for the Fort Saskatchewan Rangers in 2011-2012. Makokis is a go-to guy who can effectively quarterback a powerplay or make that great first pass. He played his first year of midget AAA as a center but decided his huge body checks and his ability to effectively read the play would serve best on defense. Makokis was also selected as an All-Star player at the 2012 National Aboriginal Hockey Championships where he helped his provincial team win silver. 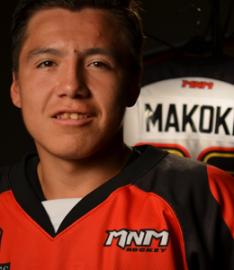