Robert- Tye Rice is 6 feet 2 inches and 174 pounds of pure strength.  Rice is Métis, raised in a true hockey family, in Invermere, British Columbia. In 2012 he moved to Fernie to play Junior B with the Ghostriders, in the Kootenay International Junior Hockey League.  RT is a responsible two way forward who has the ability to surprise his opponent with his explosiveness, his hard shot and of course his tenacity. 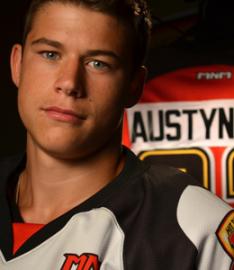