Born on April 3rd, 1995, Knockwood is from Shubenacadie Indian Brook Nova Scotia.  He stands 5 feet 10 inches tall and weighs 180 pounds.  Knockwood is what you would call a pure scorer. His stats speak for themselves. He spent his 2011-2012 season with the Cole Harbour Wolf Pack Major Midget where he led his team with 35 points.  He was also the leading scorer of team Atlantic at the 2012 National Aboriginal Hockey Championships. 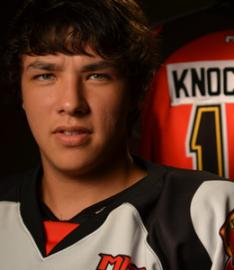