From Xaxl’ip First Nation, Brett Watkinson was born on July 24th 1995 and currently lives in Kamloops British Columbia.  He stands 5 feet 10 inches tall and weighs just under 160 pounds. Watkinson can pretty much play anywhere on the ice and he proved that during his 2011-2012 when he played defense with the Thompson Blazers of the BC Major Midget League and managed to collect 19 points for his team.  But his true strength is up front where he can win some face offs, spark the rush and score some goals. 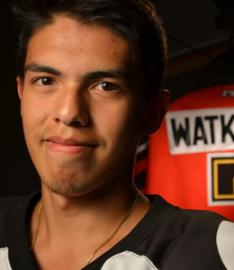