From Leask, Saskatchewan, Colby Daniels is a member of the neighbouring First Nation community of Mistawasis. He was born on July 25th, 1994 and is currently 5 feet 11 inches tall and weighs 170 pounds.  Colby comes from a long line of hockey players and hopes to follow along the footsteps of his uncle who has played in the NHL. Daniels played Junior A for the Kindersley Klippers in the 2011-2012 season where he definitely made his mark as one of the top rookies. He is known to grab the bull by the horns in key moments of a game and when he puts the pedal to the metal his blazing speed is nothing short of remarkable. Not to mention that he has never been one to shy away from the rough stuff. 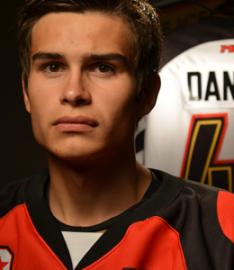