Adams is from Eagle Lake First Nation in Northwest Ontario. He was born on January 6th 1994 and is now 210 pounds and 6 feet 3 inches tall. Adams is a smart and reliable puck-protective defenseman who played his 2011-2012 season with the Kenora Midget AAA Thistles.  He was the defensive player with the most points during that season, which shows he can not only support the rush but be an important asset to a team’s power play. 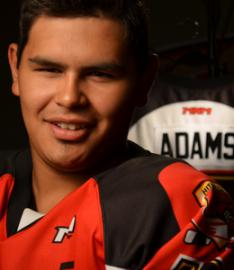